Bidding farewell to the Kraken in style

The Kraken – the unique creature imagined by the talented UV-LAB design studio - will be getting a proper send-off with a festive banquet held at Les Subs on each night of the festival.

Food trucks and bars will be on hand so we can all sit down together and pay a final tribute to this statuesque octopus who has reeled us in with his 180 metres of tentacles over the last few months. Towering over us from a height of 15 metres, this gentle giant has let our imaginations run riot, hosting workshops, inviting us to late-night get-togethers and providing a great playground for the kids. 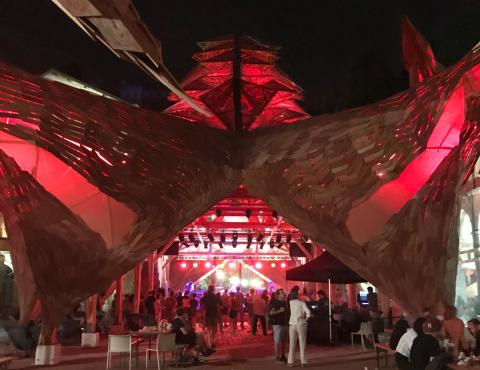 Khaled Alwarea. Khaled Alwarea, a.k.a. KhAl, is a Syrian architect and eclectic artist based in Paris. He is the creative director of the UV-LAB design studio that he co-founded with Mike Shnsho. He uses a host of different visual arts as forms of expression: photography, video, theatre set design, performance art and multimedia installations. Sexuality, individuality and artistic freedom are recurring themes in his work.  He is involved in collaborations and workshops and is a regular guest at film festivals and seminars in various countries.

Mike (Mihannad) Shnsho. Mike Shnsho is a Syrian architect, creative, and DJ based in Istanbul. A co-founder of the UV-LAB studio, he is classed as one of the earliest Syrian artists to delve into Psychedelic Trance music, performing in myriad music festivals worldwide and carving out a place as a figurehead of the musical genre.

Layla Abdulkarim. Layla Abdulkarim is a multidisciplinary architect with a long string of qualifications, starting with a diploma in architecture from the University of Damascus, her home town, where she met Khaled Alwarea. She is also a graduate of the Paris Malaquais School of Architecture (ENSA). She collaborates with UV-LAB and, in parallel, is studying new conservation and restoration techniques for endangered heritage sites in Syria, Iraq, Armenia, Cambodia, Afghanistan and even France